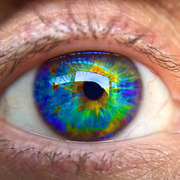 I first attended SIGGRAPH in 1988. In 2000, I screened my thesis film, "When Summer Falls," in the Animation screening room. And in 2007, my colleagues at the USC Game Innovation Lab and I exhibited "The Night Journey, an experimental video game by Bill Viola" at the SIGGRAPH Art Show. That year, our paper "Journey of Discovery: The Night Journey Project as Video/Game Art" was awarded Best Paper at Sandbox, the ACM SIGGRPAH Videogame Symposium. Currently, "The Cat and the Coup," my collaboration with Peter Brinson is nominated to be showcased as part of the online exhibition “The Aesthetics of Gameplay” sponsored by the ACM-SIGGRAPH DIGITAL ARTS COMMUNITY (DAC)

In this Lightning Talk I describe my journey to, and through, the Cinematic Arts: http://interactive.usc.edu/2013/11/05/cntv-101-and-501-lightning-talks/ Kurosh ValaNejad is an Iranian-American who was born and American-Iranian in Tehran in 1966 to an Iranian father and an American mother. In 1977, just before the Iranian Revolution, he moved to Midwest City, Oklahoma. He now lives in the west Mid-City neighborhood of Los Angeles, California. From 2001-2016, he developed well-meaning computer applications, aka Serious games, at USC research labs supported by the National Science Foundation, the National Endowment for the Arts, the National Endowment for the Humanities, the National Institute of Health, the USC Annenberg Center, and the U.S. Army Research Institute for the Behavioral and Social Sciences. As the Game Innovation Lab he served as the art director and lead artist on "The ReDistricting Game," a videogame about Gerrymandering that launched at the United States Capital Building, "The Night Journey," an interactive museum installation about spiritual enlightenment directed by New-Media Artist Bill Viola, "The Cat and the Coup" a documentary videogame acquired by the Los Angeles County Museum of Art, and "The Body Scrub Device*", a virtual fun-house mirror. The Lego filter is installed in the long-term exibit Field of Play at The Strong National Museum of Play. Now as a full-time graduate student at the USC School of Cinematic Arts’ Department of Animation and Digital Art, Kurosh mixes old and new, digital and analog to stimulate critical discussion about the re-convergence of the Cinematic and Performing Art. As an unofficial ambassador of the research labs of the USC Interactive Media Building, he encourages collaboration across divisions, schools, and institutions.